I grew up on a state park, which was a bit like having an enormous playground in your backyard.

Which, technically, we did.

My brother, Jake, and I outside the park museum. We dressed up for the occasion.

That was back when teeter-totters were fun.

Excuse me. Let me rephrase.

That was back when teeter-totters were terrifying.

I have vivid memories of clinging to my end of the seesaw while some big kid on the other (aka one of my brothers) ignored my pleas to get off.

Back then the teeter-totter engineers (who were most certainly men) did not have good, safe fun in mind when they constructed those things.

If you managed to hold on even when your partner on the other end “accidentally” hopped off while you were still six feet up, then you most certainly suffered major spinal damage when you hit the ground half a second later.

Riding a teeter-totter was a lesson in fear, stability and learning to speak up for yourself.

If you didn’t, your sweet little life, quite literally, hung in the balance.

But have you been to a playground lately?

The new engineers and engineerettes have safety-fied the snot out of those teeter-totters.

They’re pretty much a waste of good playground space now.

Even my Christian gets quickly bored with them. (And this is the kid who is still a little bit nervous around his stick horse.)

But he really is quite manly otherwise. See? He even hammers the grass.

But it’s a shame, really.

Instead of finding a middle ground on teeter-totter design, they took out all the fun and exchanged it instead for something on the extreme end of pointlessness.

(And playgrounds and kiddos worldwide have suffered for it.)

We’ve gotten all off balance on things, it seems.

Speaking of balance, I realized that I had lost mine this weekend.

It all started when I found myself wondering if there was an app that timed how long a person spent on Facebook each day.

Which, of course, is ridiculous because who in the world would want to know that?

I’d like to say that it wouldn’t matter to me because I don’t spend much time on Facebook or texting or the Internet, but, come on, let’s be honest here.

I wouldn’t want a timer on it.

Now, let it be known, I don’t believe there is anything intrinsically wrong with texting or piddling on Pinterest or Facebook or Fill in the Blank with your particular favorite form of social media.

If scrolling through pictures of what someone else is having for dinner or clicking on an “Amazing!” link about how to slice cherry tomatoes faster makes you happy, then that’s fine. No harm done.

But let’s be hypothetical here.

If “checking” Facebook means I’m staring down at my phone so much that I miss seeing Edy finally execute a cartwheel, then I have chosen poorly.

And if I’m having a real conversation with a real person on a real phone and I’m checking my e-mail at the same time, then I have gotten off track.

If I put off snuggling Hattie, or pretend I don’t see Christian clutching Goodnight Moon and baby talk begging me to read it (again) or ignore my just-walked-in-the-door-from-work husband because I’m texting then I have teetered off balance.

I am 100% guilty of every single one of these “hypotheticals”…in the last 24 hours.

Yep, Wife and Mother of the Year. Right here.

I would have told you that I didn’t have a problem.

But, folks, anytime I choose Facebook life over real life, e-mailing over listening, sending a text over loving on my family, then I have a problem.

My life and my priorities have gotten out of balance.

A couple of summers ago, while I waited outside the restrooms at a mall, I watched a little boy.  He was also waiting outside the restrooms, probably for his mom. She had given him money to ride on one of those mechanical cars that, for a quarter or two, will occupy a child for about two minutes.

For some odd reason, she had also given him her cellphone.

So while the car jerks him back and forth, plays music and sounds sirens, the kid is hunched over in the little driver’s seat, completely oblivious to it all because he is playing on Mom’s phone the entire time.

It was really funny and terribly sad.

The kid paid for the ride, sat there right in the middle of it, but completely missed it all.

That his mom had given him.

We are teaching our kids to be off balance too.

The extra scary thing is, if you have young’uns right now, like me, then you and I are raising the first generation of human beings who have, since birth, watched mom and dad constantly fiddle on their phones.

And because they are the first generation, we do not yet know what the long-term effects our social-media obsession will be on their precious lives.

Our children are the guinea pigs.

There should be warning signs ahead. 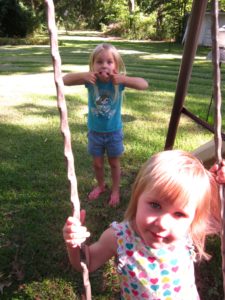 I’m not getting off completely (as you may well have noticed, since most of you probably clicked a link on Facebook to get to this blog post.)

But my tendency to stand in my kitchen and stare at my phone has gotten out of hand.

I’m tired of missing the ride.

I’m tired of letting the wrong things distract me from the best things. Too many times I’ve exchanged the fun of my life now for something as pointless as a Facebook feed.

It’s time to get things steadied.

Besides, I’ve got cartwheels to watch.

What about you? Have you ever caught yourself getting off balance? (Somebody, please tell me you can relate!) How did you get back on track?

About the Author: Hannah